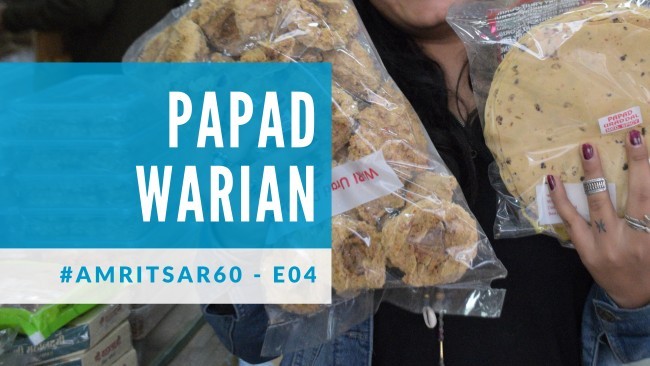 As you have already got yourself familiar with Aloo Kulcha & Lassi which were the first two food items discussed by us in the  Amritsar60 series. We now bring you the two more peppery specialties of the so-called “Sifti da Ghar”. If you call Kerala, the “Land of Spices” then you shall also know that Amritsar, the iconic city of Punjab is the home to the various piquant food items.

Before visiting Amritsar you should certainly put up a reminder as you can’t afford to miss out on experiencing the famous Papadan Warian Wala Bazaar where you will find the world-famous Papad Warian of Amritsar, two different things, but are named collectively.

This famous snack of Amritsar is not only exported to the other parts of the country but also outside India. The Papad is being prepared in the city itself for various decades now and is spreading around the aroma of the spices. The taste is so spicy and the aroma is so entrancing that makes it one of the irresistible food accompaniments to the meals in Punjab. Three different types of Papad with respect to its piquancy are prepared by the makers considering the taste buds of the people, so you just have no reason to miss out on this.

How it is prepared

As India is a land of diverse cultures and traditions, the food items and their recipes also vary from region to region. Papad is known to the residents of different states by different names like Appalam in Tamil Nadu, Pappadam in Kerala or Happala in Karnataka. Preparing it in India is often cited as an example of the women’s empowerment movement in India, as the majority of this business in India is controlled by women.

People often buy papad from markets because it needs a lot of hard work and physical force to get them done right. But it is quite certain that we can prepare them at home too. Let me share with you the recipe notes for preparing a peppery Amritsari Papad:

People in Punjab usually have their meals accompanied by it but in other parts of the country, it is eaten just as a snack with chutney or other dips. Give your taste buds an amazing experience of this spicy specialty from the famous Papad Warian Wala Bazaar in Amritsar.

Though being spicier than Papad, Warian is also prepared from dough which is mixed with the liquid amalgamation of ground urad daal, heeng, black pepper, salt, and coriander seeds. Like papad, Warian doesn’t hold any particular shape and is also left to be dried in open sunlight. Both Papad and Warian can be stored for a long time as they don’t get bad easily. Having a picante taste, it is used by the Amritsaris in small broken particles in various dishes like rice, curry & most frequently with soybean and potatoes.

You will find the whole market of the makers in the same Papad Warian Wala Bazaar which is behind the premises of Golden Temple. During the late 1980s, this bazaar used to be an unforgettable experience for the life of the visitors due to the highly pungent aroma. Still, people from different parts of Punjab visit Amritsar just because to buy Papad Warian. Want to give your food a spicy touch? Allow us to make you experience these bazaars which still hold the rich heritage of the city.