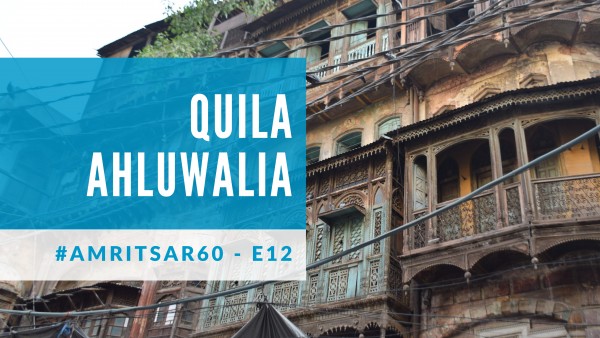 “Beauty is all around us. All we need to do is to look around.”

Amritsar is one of the holiest cities in Punjab, a city that has preserved the rich heritage and culture of the state. Though the city is well famous for the much revered Golden Temple and Wagah Border along with various high-profile sights for its travelers, it certainly has few hidden gems that are forgotten and are ignored in the recent modern times. Among these is the Quila Ahluwalia that states an avid example of Punjab’s rich and glorious past and a fine example of its beautiful architecture. Presenting to our treasure readers and followers our next episode in the series of Amritsar 60 is the Quila Ahluwalia – a fort situated in the middle of the old city.

History Of The City

As we have cited a glimpse of history in our blog related to episode 07 of Ram Bagh Gate from the series of Amritsar 60 wherein we have cited that there were 12 misls or divisions of the Sikh confederacy that controlled Punjab and attempted to expand its territory and resources from time to time. 4 of these misls, namely; Ahluwalia Misl, Ramgarhia Misl, Kanhiya Misl, and Bhangi Misl controlled Amritsar and contributed to its development time and again. Each misl was led by its own leader or chief but served a similar purpose of protecting this walled city.

The Ahluwalia Division or Misl

Under the guidance of its avid leader, Sardar Jassa Singh Ahluwalia (1718-1783) the misl took its name from the Ahluwal village in Lahore. Jassa Singh recaptured the city from the Afghan invader Ahmad Shah Abdali in the year 1762 when he tried to invade the city and destroyed Harmandir Sahib.

Gradually moving ahead, joining hands with the chiefs of other misls and defeating Mughals, he captured Delhi and the Red Fort on 11th March 1783 and hoisted the “Nishan Sahib”, their holy flag, atop the seat of Mughal Empire. It is also said that these united forces have bought back the granite slab of Takh-e-Taus – (the Peacock Throne) and the 44 pillars which were invaded by Iranians, as the spoils of wars.

Though the seat of Sardar Jassa Singh Ahluwalia’s power was Kapurthala, he built Quila Ahluwalia in Amritsar as a comforting base to visit the nearby Harmandir Sahib, and to take quick actions during the state of emergency, if need be. A residential neighborhood was developed around the Fort.

After Jassa Singh’s death, his descendants took care of this division and expanded the fort to strengthen its defensive powers. Then Maharaja Ranjit Singh took control of Amritsar from Bhangi Misl in 1802 and formed a bond of brotherhood with the then chief of Ahluwalia misl, Raja Fateh Singh by exchanging turbans. It could be because of strengthening their military and political base in the city which was wielded much by Fateh Singh.

As the history goes, in 1810, when Maharaja Ranjit Singh attacked the Multans for the fourth time, the administration of the Fort was handed solely to Fateh Singh who then renovated and expanded it further to strengthen his own image. Then in order to help Maharaja in his various events, Fateh Singh never returned to Amritsar which led to abandoning the fort by the clan. This was so because there was no one to take care of the magnificent Quila in his absence.

Then to boost Amritsar’s economy, Maharaja Ranjit Singh invited various cloth merchants or businessmen from the Marwari clan from the present-day Rajasthan, to settle in the markets surrounding the fort. They did so and this cloth market was a huge success across India.

In 1839, Emily Eden, the daughter of the then Governor-General of India, George Eden visited Amritsar and stayed in Quila Ahluwalia. She praised a lot about the fort, its magnificence, and grandeur along with the cloth merchants in her travel book Up The Country published in 1866.

After this period, Quila Ahluwalia saw a diminishing status in the books of history. The property was auctioned by Amritsar’s Municipality under their British bosses and most of the Marwari families acquired it. They demolished this fort and built various small residential quarters and shops for themselves and are still making a livelihood there. If today also we go by its alleys and galleries or balconies, a fine example of the architecture and its grandeur at one point of time in history is still avidly visible in the ruins.

Architecture Of The Fort

Spread in an area of 5000 square yards, the fort has two gateways – One that opens towards Golden Temple and the other opening towards south direction. As the road or the ground near the southern gate has been resurfaced several times, at present this gate has sunk into the ground a little.

There is a historical well inside it that has almost three handles to fetch water. Nearby is a place to bathe and wash clothes for the people. Made up of Nanakshahi bricks, the rooms of the fort still tells us the elegance of the past that encircles a big courtyard. Though this courtyard is now used by the locals to park their vehicles as the area is more recognized as a market place. The circular staircases, the decorated balconies still echo the glories of the past.

There also stood a lake called Ahluwalia Dhaab during the rule of the Sikh empire but when Britishers conquered the city, they filled this lake with mud and established a garden called Kaisar-i-Bagh on it. From the excerpts of history, the point is stated further by building a school, cloth market and a garden on this lake.

It is well said that “beauty lies in the eyes of the beholder”. We still find this place attractive and bewitching as it was dated back. Being an important part of history, we still feel that our travelers should know about this and feel the glorious past of the city.