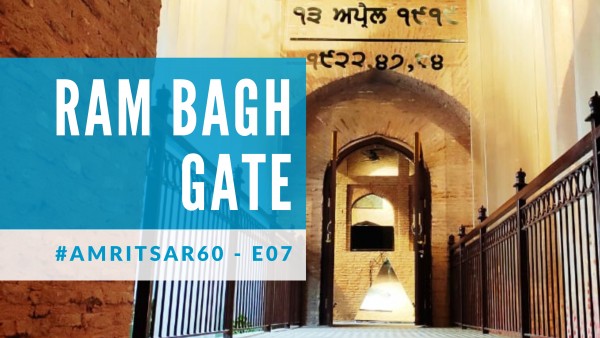 A city well-known for its culture, heritage, and cuisine has many hidden gems in its store that depicts the rich culture of Sikh religion. One such is the Ram Bagh Gate that serves as a perfect destination for our next episode in the series of Amritsar 60. The place is such that boasts about our affluent historic past and our glorious present. Due to the reconstruction of this place, it is attracting tourists on a wider scale. Let us take an initiative to make you all familiar with the grandeur of this place with our short episode on Ram Bagh Gate. So get set going.

History Of The City

Founded by Sri Guru Ramdass Ji (4th guru of the Sikh religion) in 1574 A.D, the city of Amritsar is also called Ramdaspur. As history goes, it is believed that in order to start the city, Guru Ji first invited 52 traders from different sectors belonging to nearby places like Patti and Kasur to settle here. These families then started 32 shops in the city at a place which is still known as Batisi Hatta (32 shops) and is highly eulogized in Guru Granth Sahib. That is how the trade started and paved the way for the formation of Ramdaspur.

As per the excerpts of history goes, after the last Guru – Sri Guru Gobind Singh Ji, Baba Banda Bahadur a Sikh from Nanded came to Punjab and inflicted several crushing defeats on the imperial Mughal forces. This led to the rise of Sikh power and the rise of several “jathas or bands” called Misls. 12 misls of the Sikh confederacy controlled Punjab and attempted to expand its territory and resources from time to time. 4 of these misls, namely; Ahluwalia Misl, Ramgarhia Misl, Kanhiya Misl, and Bhangi Misl controlled Amritsar and contributed to its development time and again.

Before Maharaja Ranjit Singh, outer Amritsar was controlled by the Bhangi misl who built the Gobindgarh Fort. The main reason to erect the fort was to save Harminder Sahib and the city from the invaders using the Grand Trunk road throughout the 18th century who often attacked the city for the purpose of loot.

The most powerful misl was the Ramgarhia misl, led by Jassa Singh Ramgarhia who was the first to fortify the city with a huge mud wall calling it Ram Navami or fort of God. During the misl period barracks, bungas, forts, and the Havelis were constructed as required around the Golden Temple for use of the Sikh Army.

Only Surviving Gate In The Walled City

Maharaja Ranjit Singh brought all the misls under his control and took over full control of Amritsar by 1802 A.D. He also built a huge wall with 12 gates around the city of Amritsar. But only one gate – The Ram Bagh Gate stands in its original shape rest all other gates have been reshaped by the Britishers. For some time, this place has been served as a watchtower to take control of the invaders. Later, he built the Ram Bagh Palace called the Summer Palace and the garden of Mughal Lines and covered the Harmandir Sahib in gold and made it look as we see it today. Maharaja also fortified the Gobind Garh Fort on the modern lines. It is believed that this Ram Bagh Gate was a connection between the Summer Palace and the Golden Temple.

The Structure Of Ram Bagh Gate

The internal structure of the Rambagh Gate in Amritsar has been redeveloped and upgraded as part of the HRIDAY project of the National Institute of Urban Affairs of the Union Ministry of Urban Development and the Amritsar Municipal Corporation (MCA) to conserve the cultural importance of this historical site. The anchor of the Amritsar project is well-known conservation architect Gurmeet Rai who designed the Amritsar heritage sites rejuvenation as an inclusive people’s collective. The reopening of the project was done in 2018. Some of the most important aspects of this gate are as follows:

Since the gate is built in the old and busy area of the city, it has many of the popular places which can be listed as below:

Very nearby to this Gate, there is a generations-old printing press, which was established in 1930 by Britishers. They imported the printing machines from the USA at that time and believe us, those machines are still working in their best conditions to date. Initially, these machines used to print in all three languages – Hindi, English, and Punjabi but nowadays only two languages are running common on these machines which are English and Punjabi. All the MCA documents are printed through this machine only.

In the close vicinity of Ram Bagh Gate, there are many famous markets. The place is surely called the mini shopping complex where everything is available from vegetables to fruits and pickles to dry-fruits.

Since Amritsar is riding high on the tourist scale due to the restoration of various heritage properties here, so City On Pedals is coming up with an initiative to rebuild this hidden gem as a famous tourist destination by making our travelers aware of its historical and architectural importance. We are sure that after visiting here, the place is going to be recognized as an important place for world-tourism.