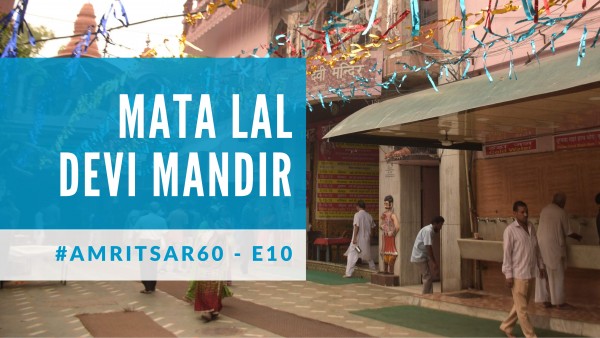 Being an iconic city of temples and Gurdwaras, Amritsar also has many Gurus and saints that are revered as Gods and Goddesses and are believed to be the incarnation of some Superpower. Today in our series of Amritsar 60 we are going to unveil a similar story of a Female Saint – Mata Lal Devi Ji, who was so blessed with some magical powers that it is believed that she has a cure for all the problems. There is a famous temple in the city of Amritsar on Mata Ji’s name called Mata Lal Devi Temple. Let us unveil the history, the story and the belief behind this temple.

Built-in 1989, in Rani Ka Bagh, amidst the populated residential colony it is a sacred Hindu sanctuary that is a replica of famous sacred Vaishnodevi Temple at Katra. This temple used to be the shrine of 20th Century “Female Saint”, Mata Lal Devi Ji, popularly known as “Pujya Mata Ji” – (Respected Mother Figure), a human-deity who lived on fruits and milk all her life. A Brahmachari belongs to Marwaha Khatri Family lived on fruits and milk. After Partition, she came to Amritsar, attained nirvana in 1994. The temple is believed to be full of miraculous powers. Considering that people who particularly want to start a family, come for blessings from here and with the blessings of the bespectacled female deity, all their wishes are fulfilled shortly after. Because of the fact, it attracts people from all over India. We can see a swarm of people inside the temple praying and chanting Bhajans in the praise of Mata Lal Devi Ji. Renamed as Lal Bhawan, after the presiding deity, during “NAVRATARAS” it remained crowded with devotees from early hours of the morning to late hours of the night. The “ASHTAMI JAGRAN” is celebrated with great zeal and zest in the temple premises and is attended by hundreds of people. The birthday of Pujya Mata Ji is celebrated on 21st February every year, as an Annual function and Gala-Day of Lal Bhawan.

The hallway of the temple is adorned with a spectrum of colorful mirrors with lights popularly called as the Sheesh Mahal by many. there are numerous vivid, intricately designed brilliant altars in the primary mandir. With some twisted pathways, ankle-deep waterways, there is a series of shrines and caves inside the temple. Being a home to various deities besides Lord Shiva, Lord Brahma, Goddess Kali, and Goddess Saraswati, it has a sacred seat for “Mata Ji” in the center of all.

The distinct feature about this Hindu temple is that the main Prashad that is offered to the devotees of this temple from Mata Lal Devi Ji, is the Pushps – (The Flower Petals), which is regarded as highly sacred by people and believed to be a cure for all sicknesses. Apart from eating that Prashad, people also keep it in their wallets and purses as a mark of Blessings from revered Mata Ji and believe that the same will bring some good fortune to them. Another peculiar feature of this temple is the “Gufa” – (a Little water channel) which is a miniature of popular Vaishno Devi Gufa, with all the three deities residing in – Maa Katyayni Devi, Maa Chintpurni Devi, and Maa Jwala Devi. One needs to cross the caves by bending and crawling through some parts. These peculiar features of this temple make it distinct from all.

A Small Market Surrounding The Temple

In the close vicinity of the temple, Shri Laxmi Narayan Bhojan Bhandar owns various shops in and around the temple that serves some amazing food made up of Desi Ghee like Samosa, Kachori, Poori Aloo, etc. Then there are numerous shops of sweets like jalebi, barfi, etc. In the close circuit, you will find shops that sells various things that are used in the temples while performing various rituals like coconut, chunni, holy books, etc.

Festivals are celebrated with utmost devotion and gaiety at the temple. Free food is served to all. If not the religious sentiments, then the magnificently unique concept of the interiors can be the call for a visit to the Mata Lal Devi Temple. Being an intrinsic part of our Wagah Border Tour, it is visited and enjoyed by many of the travelers from around the world.