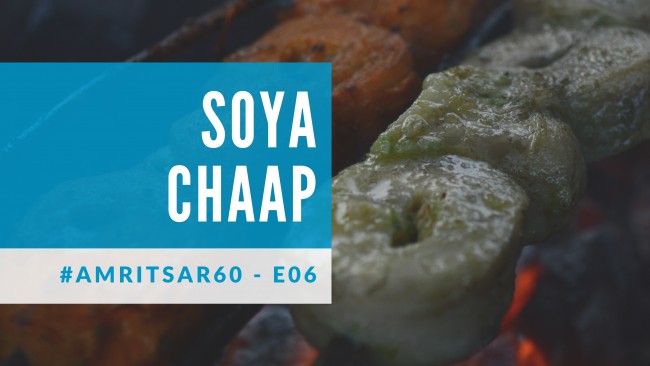 We often have heard of this famous saying, ” There is no love sincerer than the love of food.” which is literally a truth. Visiting Amritsar and not trying out the luscious taste of the street food items here will be a just a major missout from your side. It may be early mornings or late nights, the city has a variety of succulent items to consume around the clock which you can experience with our street food tour.

If you are looking for something flavorsome and nutritious at the same time then you are in the right place. Soya Chaap is one such snack that is protein-rich and is usually served with some accompaniments that make it one of the most admired street food in the city. As its appearance and texture resembles the chicken, many vegans get into the state of dilemma seeing it, though it is a vegan dish. Are you tired of eating those same curry dishes again and again? Substitute the main ingredient of that curry with the Soya Chaap and experience a whole new taste that buds crave for.

As its appearance and the texture resembles the chicken, many get into the state of dilemma seeing it, though it is a vegan dish. Are you tired of eating those same curry dishes again and again? Substitute the main ingredient of that curry with the Soya Chaap and experience a whole new taste that buds crave for.

Being a good source of protein and having a tempting taste at the same time, Soya Chaap has made a special place in the heart of people here in India. Usually, locals consume it just as an evening snack with sliced onion/chopped salad, mint chutney. At times, locals prepare it in gravy as a dining dish too and eat it with Rumali Roti which is traditionally made in Mughalai style and is too thin to be folded like a handkerchief.

Made of Soyabean chunks marinated with different spices the dish is undoubtedly a versatile ingredient, which can be enjoyed in stir-fries as well as gravy preparations. To help you learn about its varieties we are listing down various categories in which you can find them here in India:

How Soya Chaap is prepared

It is a kind mock meat prepared from soybean chunks and flour, wrapped around a wooden popsicle to give it an appearance of a leg piece though it is purely a vegetarian item.

Getting readymade Chaaps from the market? You will always find some quantity of maida in it which is used to bind the dough. But if you want to have 100% gluten-free chaap, here is secret behind this:

They say when you are in Punjab, be like a Punjabi. So taking this forward we are also sharing with you the recipe notes of the most lovable and favorite variety of Soya Chaap in Amritsar that is Malai Chaap:

Gradually becoming an integral part of the street food family, the outlets serving the varieties of Soya Chaap are also making their way into the market but here are some of the best Chaap serving outlets in Amritsar: