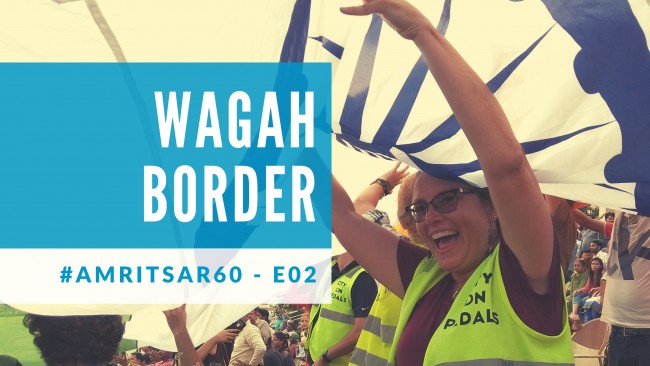 Being an Indian one thing which we cannot really get settled enough is the feeling of Patriotism that we all have in our blood and why only Indians, we believe that everyone has the same valor for one’s own country. So without any brain-storming over the next subject of our episode, we directly moved in towards the one and the only Open Border Crossing between the two much talked about nations – The Wagah Border.

It is the lowering of the flags ceremony which is practiced daily by the Para Military forces of India and Pakistan Rangers. Have you ever realized how tough it is for our soldiers to march and display the strength of our nation with their heavy uniforms and colorful headgear in the extreme weather of Amritsar. well, that is what they’re proud of. The local crowd along with the VIPs, cheer with nationalistic enthusiasm the Slogans of Jai Hind during the ceremony to let our soldiers know that we are standing behind them always to support and respect their ultimate sacrifices. The ceremony aims to evoke patriotic fervor among the crowd. Some Indians wave the Tricolour, while others dance to Bollywood songs like “Mere Desh ki Dharti”, “Mera Rand de Basanti Chola” that blares through speakers. This side trip from Amritsar in Punjab has always been a favorite tourist attraction be it National or International.

Reaching To The Wagah Border

There are many options for you to get to the Wagah Border like cabs and auto-rickshaw. And if you are at the Golden Temple side, you will find many Cab drivers asking you to go to the Wagah Border. It is recommended to reach there earlier in the afternoon as there is a huge amount of crowd. Approximately a number of 18000 visitors come to catch a glimpse of this Nationalistic pride of India. One will feel even more patriotic after reaching there and by seeing the enthusiasm among other visitors, especially in girls and women.

Getting Inside The Premises

There is a 1km walk from the drop off point to the ceremony area. The mass amount of crowd usually gathered much before the ceremony begins. Being a military area and a Z-security area, no luggage of any sort is allowed inside the premises. And if you are a foreigner, it is recommended to come along with your passport. Allow us to guide you through the area through our well-curated Wagah Border Tour to make sure that you reach well on time and get settled on your seats to enjoy the ceremony started.

After reaching the ceremony you will witness the real action begins. Music blasted through the speakers and the local females started walking to the center of the stage. Initially, the otherwise slow body moves will change to a cheerful dance where women are enjoying and expressing their pride for their country. Men, on the other hand, weren’t allowed to join the party so they were recording the dance with their cameras and smartphones standing on the stairs. Everyone was lost in the moment, women of all ages and nationalities even the older women are enjoying the moment.

Now is the time when women and girls are given a chance to carry the flag and run to the border gate and back. They run across the stage by carrying the flag so proudly. Amidst the applause and cheers of all the audience, the celebrations went to another level.

Now comes the time of final showdown. Just after these festivities, the main parade starts. 15 soldiers including 2 female soldiers from the Border Security Force(BSF) wearing unique ceremonial uniforms with headgear spreading out like peacock’s feather (which also signifies our National Bird) were giving an aura of importance and solemnity. Marching together in a strict formation, often kicked their legs high up to showcase our strength, the valor, the courage and the strength of India’s First Line of Defense is prominently visible. The parade is really magnificent and exhibited the discipline of our soldiers who are protecting our borders selflessly. Besides this, it is a showcase of the unity and strength of our country to our neighbor country Pakistan.

The loud cheering from both nations makes the atmosphere even more intense. Each time the shouts are getting louder and louder. Every cheer was filled with nationalistic enthusiasm. To experience something like this was totally different and amazing.

After an hour of parade and cheering, the ceremony comes to an end when the soldiers from each side lowered the flags. They salute each other and show a friendly gesture by shaking their hands. This ceremony is to show the rivalry as well as the brotherhood between the two nations. It is also to show that despite so many differences between the nations we will still stand together and cooperate with each other.
If you are lucky enough, you can witness the special bus Sada-E-Sarhad, that travels from Delhi to Lahore. It has been started by a common agreement signed by both countries.

So next time when you be in Amritsar, do not forget to experience and share your reviews about the much-talked-about flag-lowering ceremony with us.