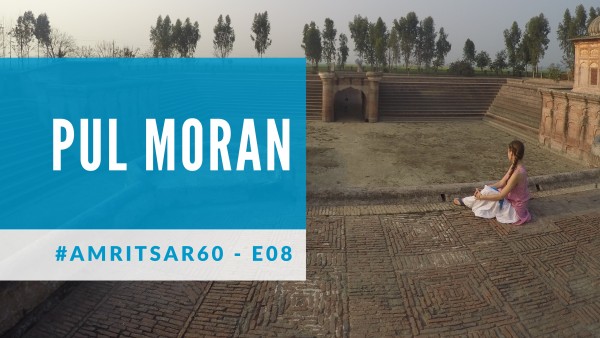 A land of diversity, a land of history and culture, a place which is known as the Cultural capital of Punjab, Amritsar held a very prominent place during the era of Maharaja Ranjit Singh in 1800-1840. Considered to be the Golden Era of Punjab in which Amritsar was fortified, there stands a historic site by the name of Pul Moran and yes, it is our next stop in the series of Amritsar 60. Popularly remembered as an excellent example of architecture, the place is also revered as a fascinating tale of love between a Maharaja and a commoner.

Just as Taj Mahal in Agra is revered as a monument of love similarly Punjab has its own Taj Mahal in the form of Pul Kanjari, now named as Pul Moran that narrates an eternal Love story of a Royal – Maharaja Ranjit Singh, and a commoner – Moran, a Muslim nautch dancer. The legend has it that Maharaja Ranjit Singh used to travel often between Amritsar and Lahore when his empire was at its zenith. The place was often used as a rest-and recreation spot by the King which is 40 km from Amritsar and is near to Indo-Pak Border, popularly called Wagah Border. A concubine was called especially for his entertainment. Moran was a young Muslim dancer living in a nearby village. She was Maharaja’s favorite. Maharaja use to favor her with many gifts on her every visit. On one of her visits, she lost one of her shoes which was made of silver and was gifted by Maharaja, in the flowing canal. She refused to perform that night until her shoe was retrieved. Seeing his favorite dancer depressed because of the loss of a shoe, the KIng ordered to construct a Pul – bridge, to avoid such an incident to happen again.

Since the construction was done primarily to give a travel comfort to Moran, it was named Pul Kanjari, – Kanjari being synonymous with the dancers of ancient times. Later on, Historians argued that the name ‘Pul Kanjari’ is derogatory as Moran was not a concubine and was later married to the king, which technically made her the queen. So the name was changed to “Pul Moran”.

Emperor’s Other Connection with Pul

It is also believed that Emperor Shahjahan has a close connection with this Pul. The canal over which the bridge was made, was dug in the behest of Shahjahan in the early seventeenth century with a prime purpose of bringing the water of river Ravi from Amritsar to Lahore for irrigation of Shahjahan’s favorite Shalimar gardens. Even the Lahori bricks which were used to fabricate the bridge were also used to erect Lahore Fort and the Taj Mahal in the Mughal era.

Why Maharaja was Punished?

Besides being a trade route between Amritsar and Lahore, the bridge became a symbol of the love and unity of the Maharaja and his Queen Moran. Though by marrying Moran, besotted King wants to set a social precedent for communal and social harmony, he was summoned by Akal Takht and was awarded a punishment of public flogging which he gladly accepted. But later, this punishment was reduced to a fine.

Apart from the bridge, the Maharaja also made one Sarovar-(historic tank) to store water, one Gurudwara, One Mosque, one temple dedicated to Lord Shiva, that depicts our rich culture in the form of frescoes covering the inner walls of the temple and various art and architecture. Through its war memorial, the place sets an example of not only self-love but the love for country – a feel for patriotism by the soldiers who had to lay down their lives for the people of their country. In our Wagah Border tour, we take our guests to all these historical sites to give them some glimpses of the past.

So get set going. Visit the place yourself and share your experiences with us here.