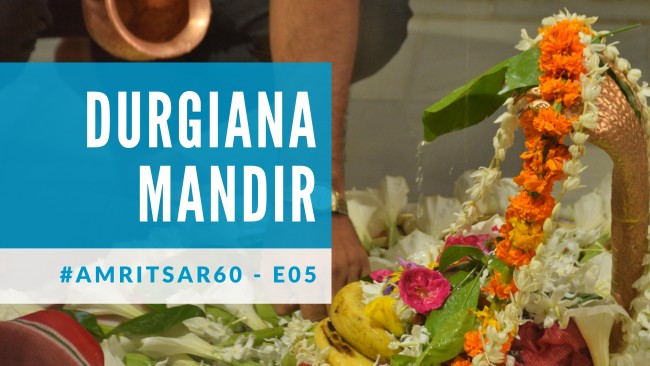 Amritsar – founded by the fourth Sikh Guru – Shree Guru Ram Dass Ji is also called “Ramdaspur”. Referred to as Holy City, it is believed to be the central point of Sikh faith with the most revered “Golden Temple”. Not only this, the city is famous for many Hindu temples as well some of which are regarded as age-old temples and are called Prachin Mandir. Being a city of many-splendors Holy versions, these temples have their own stories to tell. A city where the past has shaped the present and is remembered till date, we as a core team of City On Pedals take immense pride in covering Durgiana Temple as our next chapter in the series of Amritsar 60. After all, a walk through the past is a window to the city today. We would be covering certain pointers in our blog here.

Originally built in the 16th century, the temple has a brief moment of history related to it. It is believed that in the courtyard of this temple is a tree where Lava and Kusha – the sons of Lord Rama and Devi Sita, bound Lord Hanuman after he challenged the horse of the Ashvamedha yajna. The place is also believed to be the one where various Yagyas have been performed by Iksvaku, the grandson of sun-God.

Originally built in the 16th century, the temple was renovated in 1921 by Guru Harsai Mai Kapoor in a similar architectural style as was Golden Temple. After the renovation got completed, Pandit Madan Mohan Malviya inaugurated this temple and opened it officially for the public.

Situated inside the old city near Lohgarh Gate, the architecture of this premier temple is similar to that of the Golden Temple. Durgiana Temple, a derivative taken from Goddess Durga, who is a chief presiding deity worshipped here. We also find the idols of Goddess Lakshmi – (Goddess of Wealth) and God Vishnu – (The Protector of the World) on whose name the temple has also been given a name of Lakshmi-Narayan Temple. Build in the year 1921, the temple has also given the name of Sitla Mata Mandir – (Goddess Sitla Temple) as the temple also has small subsidiary temples of Mata Sitla and Lord Hanuman which are again famous Nation-wide and have an importance of their own.

Build in the middle of a sacred pond measuring about 520 x 430 feet, the dome and canopies of the temple are similar to the Golden Temple. The dome is illuminated with colorful lights and is gilded with gold. Extensive use of marbles adds to the temple’s features. With a rich collection of Hindu scriptures, Temple is believed to be an amalgamation of Myths, History, and Religion. It is also referred to as Silver Temple owing to the silver doors of its sanctum, on which are embossed the incarnations of Lord Vishnu and other deities. It is believed that there is a wish-fulfilling tree in the temple complex where devotees offer flowers, apply turmeric and Vermilion paste. They also go around this tree several times seeking a host of favors.

Rituals To Observe In The Temple

Hinduism has been called the oldest religion in the world, and some practitioners and scholars refer to it as Sanatana Dharma “the eternal tradition”, or the “eternal way”, beyond human history. There are certain rituals and traditions associated with a temple according to Sanatana Dharma. It is believed that all the cosmic elements that create and sustain life are present in a Hindu temple – from fire to water, from images of nature to deities, from the feminine to the masculine, from the fleeting sounds and incense smells to the eternal nothingness yet universality at the core of the temple. So here we are giving you an insight into all this while performing some rituals.

Panch Snaan means giving a bath to the idols of the temple with 5 things that are considered as sacred by Shastras. These are – Cow Milk, Curd, Ghee, Honey, Liquid Jaggery along with water. These things are also called Panchamrit which is then distributed among all the devotees who very spiritually take the Panchamrit on their palms and drink it without making any noise. It is believed that just like we take a bath daily, the deities are also to be given the same.

This ceremony has a deeper significance in Hindu rituals as per Puranas and Vedas. This is just like offering clothes to the deities after giving them a bath. It includes the offerings of fresh flowers and fruits. Amongst the marigold, rose, and white lilies what also finds a place of pride is a Bilva leaf or Bel Patra. Apart from the holy meaning connected with these leaves, these Bel Patra are also considered as immersed with many medicinal and healing benefits. A portion of this Prasad along with few Bilva leaves are then taken back by the people at their homes with a belief of taking the deity’s energy to purify their surroundings and bring positive energy.

It is the ceremony of lights, the waving of lamps before the idols in Hindu temples. A lamp made of mud or metal or ghee is used for this. In many temples, we have seen that the head-priest holds a big metal lamp in his hand filled with oil and some camphor is burnt inside or it is lighted with the use of cotton wicks and offers in the circular motions to deities. It is an act of immersing oneself in God’s divine form. Symbol of five elements – Space (Akash), Wind (Vayu), Fire (Agni), Water (Jal), Earth (Prithvi), it is believed to be performed in the spirit of humility and gratitude.

In Hindu Tradition it is seen in many temples that people break coconut in front of the idol of Lord Ganesha after performing Aarti. Coconut is considered as a pure (Satvik) fruit that is normally offered to Lord Ganesha. It is believed as the purest form of offering to God since the milk and the white kernel is not polluted due to the hard outer shell. According to Hindu Mythology, the coconut symbolizes one’s own head, specifically the person’s ego. In the process of breaking the coconut, the person breaks his ego and pride which he might have achieved or is going to achieve, in front of Almighty. It is always said when the ego is broken, only then you can taste the sweet milk of success, or the fruit itself.

This refers to a mark on someone’s forehead, usually priests, in the Hindu temples. It is a ritual of marking someone’s forehead with a fragrant paste, such as of sandalwood or vermilion as a mark of devotion when they bow their head in front of their revered deities. Applying of tilak in your midbrow is a kind of ritualistic worship of God. It is believed that this imparts peace and positive vibrations to the person, the entire day. These marks are of different shapes and relate to different deities.

At present, the surrounding of the temple is under renovation since 2013 for providing space to worship both inside and outside of the temple and a space to other facilities like shopping complex, parking area, open-air theatre in the temple. The project will be completed soon and will prove to be an avid example of its architecture in the Holy city of Amritsar.