The granary of India supplying surplus food grain to the whole country, where most of the land is devoted to the agricultural activities. Also as a part of the interesting fact, Punjab has agriculture and cultivation in its name itself. The British state of Punjab before the time of India’s independence had five rivers (Jehlum, Chenab, Ravi, Beas, Indus and Satluj) flowing through it, which marked its name as Punj(five) + Aab(waters) and making it one of the most fertile lands for the agriculture in the world.

As going through agriculture, one of the most prominent festivals for farmers of this state is Vaisakhi. Vaisakhi or Baisakhi is marked as the harvest festival of the rabi crop like wheat, rice, cereals, etc. Besides the harvesting of the crops, this festival has religious and historical importance related to it and most importantly to Amritsar.

Also for helping you out, we are going to tell you about the connectivity of the city and how you can commute and experience this heritage city.

Foundation of the Khalsa

Going by the religious side of this day, it’s considered to be the foundation day of the Khalsa (Punjabi: “the Pure”) in the history of Sikhism. That’s the reason Vaisakhi is considered as the most important Sikh festival. its story is related to the 10th guru (teacher) of the Sikh religion Sri Guru Gobind Singh Ji. When the atrocity of the Muslim kings was increasing on the Hindus and Sikhs, Guru Ji decided to take a step by calling a communal gathering at Sri Anandpur Sahib, which is approximately at a distance of 180 km from Amritsar, where he asked five men to step forward to surrender their life before him as they were going to be beheaded by the sword he was holding out and without asking any questions, five men step forward from the gathering. This whole process was a test by Guruji so as to check who can give his life on his one saying. The five volunteers who stepped forward were initiated into the Khalsa – a special group of Sikh warriors. These five Sikh warriors played an important role in Sikh history. They were not only vowed to fight the atrocities but also had to conquer the inner ego and humility and had to serve the humanity selflessly and the same is followed till today. That’s why Sikhism is one of the most respected religions in the world.

On the very day in the year 1919, marked as the black spot in the history of India’s independence. in Amritsar, a peaceful protest was going on to condemn the arrest of two national leaders hundreds. At Jallianwala Bagh(garden), just a piece of land till that day, walled from all the sides by houses and had only a few entrances and few exist that even used to remain close and was closed on that day to and one main entrance through a narrow lane. Reginald Dyer who was holding the command of the city on that day had banned all the meetings and gathering in the city, however, this notice was not widely spread and as of Vaisakhi, many people were gathered there not to protest but as a part of Vaisakhi celebration. On hearing that meeting had assembled at the place, Dyer with his troops including Gurkhas, Sikh, and Sindh rifles and two machine gun mounted armed cars marched towards the garden through that narrow lane entrance and blocked it although the cars were not able to enter through the narrow lane otherwise the death toll had considerably risen. All soldiers gathered on a risen platform in front of the crowd and open fired on them without giving any warning or a call to disperse and it continued for 10 minutes and was directed towards the narrow escapes through which people were trying to flee. General even asked the soldiers to shoot directly at those portions of the gathering which were most crowded. 1650 rounds of bullets were fired according to the official records and 379 were identified dead but actually, thousands of them died on that day including women and children. Such cold-blooded murder plan shocked the nation with the anger, while the dyer was celebrated in the British parliament.

On this Vaisakhi, we will be observing 100 years of Jallianwala Bagh Massacre which gives you one of the most important reasons for visiting Amritsar.

Through the history has marked up Amritsar with some happy and sorrow movements, but we will never let your festive spirit down at Amritsar. we have much reason to let you indulge in the festivity of Amritsar in its own way and one of the most important reasons for it is food.

Foodies are always welcomed with us and Amritsar as the centre of the Sikhism in the world is one of the most prominent attractions for the Baisakhi. on the very day, farmers with their very first harvest come to the golden temple to pay their respect to the lord for all the resources which are provided for healthy crop harvest. The same harvest is used as raw material for the community kitchen of the golden temple which serves approximately 50,000 people each day for the whole year and hence is one of the biggest community kitchens in the world. community kitchen or Guru ka Langar, where all the people without any divides of religion, caste, creed or wealth is the best example of that all are equal in the eyes of God. You can sit with the other people as one community and have a taste of divineness in the food that is being served. To run such a big kitchen is like running an administration in its own, but the whole work is made easy by the volunteers, more than 90% of the kitchen is run by the volunteers. the speciality of the kitchen is anyone who wishes to volunteer for the kitchen can easily do in any way, maybe it’s making food, serving food and water or cleaning the utensils, the only thing that is needed is your devotion. Even you can volunteer here with your full devotion. 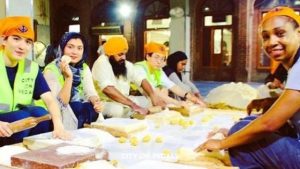 The best time to volunteer is early in the morning when one of the most prestigious ceremonies of palki sahib is being carried out. The morning tour provides travelers and backpackers with the unforgettable experience of the palki sahib ceremony which is probably one of the most majestic and humbling sightings inside the Golden Temple and you can also experience volunteering for the biggest community kitchen in the world. 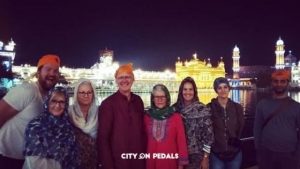 Experience the calmness of Early morning in Golden temple

While Amritsar is famous for Makki di roti and Sarson da saag, this Vaisakhi we will let you know about the other famous special Vaisakhi food which you can taste while experiencing the city which includes Punjabi Kadhi Pakora with Chawal. The Chawal or Rice being the staple food in Punjabi households during Baisakhi celebrations adding up the spicy and sour taste. Kadhi Pakora which is a blend of Chick Pea flour or Besan, Curd and spices give a sparkling taste to your mouth. This is the best example of Punjab’s rich Food culture. 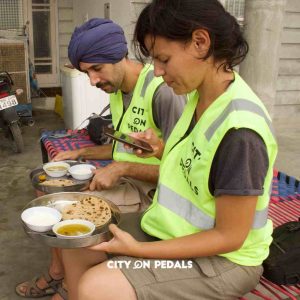 Experience the Local taste of Punjab in Local style

Amritsar is famous for the finger licking sweet dish and for Vaisakhi, you can try Gud Ka Halwa, which is a delicious dish made out of Ghee, Semolina, and Jaggery. while in Amritsar you must give it a try it would definitely stick your tastebuds.

The best way to experience Vaisakhi is one should visit the local villages near Amritsar. These villages still hold the local flavor of Vaisakhi with the help of their heritage, culture, and farms, that’s where the soul of Punjab exist. you should definitely try this out, it would surely paste a new picture of India in your mind and also the locals would be really happy if you visit them to experience their culture. 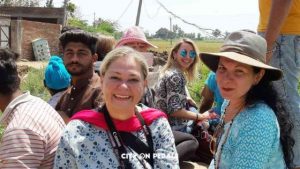 How about some ride with local people 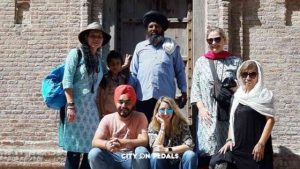 A community that you will never forget

The best way to experience it is with the local village tours where you will experience the real culture of Punjab while travelling through the farms and local bullock cart rides. Also one can interact with the locals which is one of the most amazing things, where every person has his own story to tell you so that when you go back you will be fulfilled with the experience that traveling gives one. 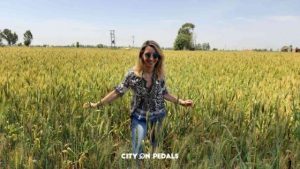 The local farms you will definitely fell in love with

If you’re a lover of history then Amritsar has much to offer you, the old walled town which was under the rule of colonial empire and then had the experience of the rule of Maharaja Ranjit Singh, and also the city which was most affected by the partition. these all factors have left their marks on the city in the form of architecture, paintings, taste, and culture. 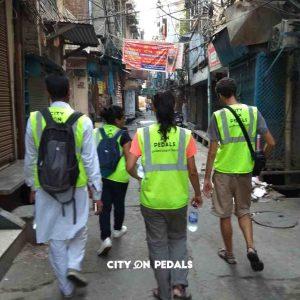 The local forts, the buildings touched by the colonial architecture, the local food itineraries will amaze you in its own way. The Heritage walk tour will let you dig deeper into the history while tasting the local food of Amritsar. It’s the best thing you can do here this Vaisakhi if you are a lover of history, culture and food.

Now let’s talk about how you can get to this heritage city and commute through it.

Being a small town you can easily commute over auto-rickshaws or cycle-rickshaws, but in my opinion Amritsar is a city to be experienced not to travelled so the best way you can pick out is traveling on foot or by cycle-rickshaw, cycle rickshaws being slow and open from all over lets you experience the local sites of the city, while on foot and google maps in your hand you can easily travel from one point to another while having taste of street food and local old buildings and heritage sites.

Exploring the city on pedals

While the best way out for experiencing the city is by commuting over a bicycle and have a taste of the city with local sightseeing. And yes if you need help with the currency exchange you can check out with this blog, it would definitely help you out.